Menu
Trending
Biden-Putin: What’s On The Table (And Why No Progress Can Possibly Be Made)
COWARD: Biden Chickens Out Of Joint Press Conference With Putin; Here’s His Excuse…
The Wizard Of Oz: The Dark Reality That The Deep State Hides From The World
Texas Border Patrol Arrests Over 100 Illegal Immigrants Held in ‘Inhumane’ Stash House
Financial Blowout Ahead: Lobotomized Economists Clash On The Deck Of The Titanic
Bombs In Paradise: How Hawaii Is Fast Becoming The Most Militarized Place On Earth

Despite having doled out nearly 800MM doses of its home-made COVID-19 vaccines, Chinese authorities are struggling with yet another stubborn outbreak in the city of Guangzhou. A week ago, we reported that local authorities had ordered China’s first lockdown since January. But while initial restrictions were relatively mild compared to the lockdowns imposed in Wuhan, and elsewhere, last year, authorities have decided to tighten restrictions as new cases have continued to be identified.

The AP reports that residents of the southern Chinese city will no longer be able to leave unless they can show that it is absolutely necessary to do so, following an outbreak of COVID-19 that has sickened dozens of people in recent days.

According to local authorities, anyone who is given permission to leave must show a negative test for the virus taken in the previous 2 days, according to rules issued by the city government that take effect Monday. The same rule applies to anyone seeking to leave the surrounding province of Guangdong. 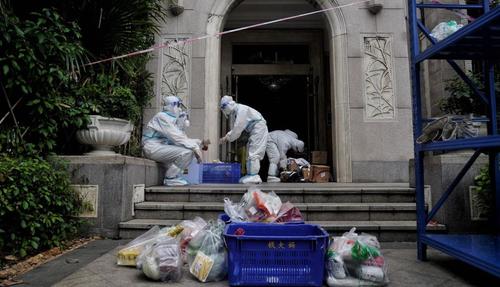 The city also is restricting indoor dining, conducting mass testing and banning residents in high-risk neighborhoods from leaving their homes. At least two districts in the city of 18 million people have been closed off entirely. And any residents who have traveled through the Nansha, Huadu and Conghua districts of the city have been ordered to be tested for COVID immediately. Reuters added that authorities in Nansha also ordered restaurants to stop offering dine-in services while calling on gyms, pools and other public venues to temporarily cease operations.

Meanwhile, about a dozen subway stops throughout the city were also closed.

The variant causing the Guangzhou outbreak (the “delta” strain which was first identified in India and has since spread across the US and Europe and Asia) is believed to be more infectious because those who carry it are slower to display symptoms while shedding more virus particles.

And although Guangzhou hasn’t reported any deaths from the outbreak, the city reported another four locally transmitted cases in the 24 hours to Monday morning, bringing its recent total to more than 100 cases since May 21.

Nationally, the CCP has been focused on rolling out COVID-19 vaccines to an increasingly younger group of patients. And on Monday, the country revealed that it has authorized the emergency use of one of the Chinese-developed jabs, CoronaVac, for children aged between 3 and 17 years. Coronavac vaccine is being manufactured by the Beijing-based pharmaceutical firm, Sinovac Biotech. Study data show the vaccine has been found to be 51% effective against symptomatic disease and 100% effective at preventing severe COVID-19 and hospitalization on adults 18 years and above.