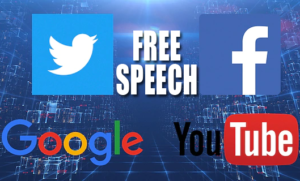 Buglecall supports the protection of our civil liberties under the Constitution and the Bill of Rights. We have a particular focus on the First Amendment which embodies the liberty of free expression through speech and the media, freedom of religious belief and practice, freedom of political belief,  and the right for peaceful assembly to appeal to the government to modify policies and eradicate injustices.

Over the past decade, the rise of “cancel culture” and “woke” ideology has drifted out of the college campus and into mainstream society, becoming what some critics have described as a “cancer” in the American workplace and in the halls of government. Thousands of individuals, including some CEOs, have faced discrimination for their beliefs or have been even terminated from their companies by activist co-workers and shareholders out of non-compliance with the newly dominant elite ideology, said Andrew Crapuchettes, the founder and CEO of Red Balloon, in an interview with The Epoch Times. “Wokeness” in the workplace is also hurting American technological innovation and talent at a time when the United States is under threat from hostile foreign rivals like China, according to Crapuchettes, whose new start-up connects conservative businesses and workers without fear of discrimination due to their personal beliefs….

If you spend your time scrolling through the flaming dumpster fire that is the censorship-prone bird app, Twitter, then you’ve probably seen the comment “nature is healing” under some video of a thug getting shot while trying to attack someone, a thief getting knocked out cold while trying to mug a victim he thought helpless, or some other video of the enemies of civilized society getting their due in a harsh way. Well, now that Liz Cheney has gotten brutally massacred by her Trump-backed primary challenger, Harriet Hageman, I think it’s more than fair to say that “nature is healing” when it comes to the body politic of the GOP expelling the Trump Derangement Syndrome RINOs from its system. And while Liz’s loss was particularly brutal given her insistence that she was going to win up until the bitter end (she was giving off some serious “Hitler in the bunker talking about counterattacks in May of ’45” vibes), she’s far from the only RINO that has lost in recent weeks as primary elections ramped up. In fact, there are now just two of the 10 RINOs in the House of Reps that voted to impeach Trump that even made it through the primary season. Those two would be Calif. Rep. David Valadao and Wash. Rep. Dan Newhouse, two blue state Republicans that managed to win their primary races and now will face Democrat challengers, though whether voters will be able to discern between them and their marginally more leftist peers is doubtful (that’s a joke, fact-checkers). In any case, all of the other eight Trump impeachers are out, either because they lost in humiliating fashion a la Cheney or quit before having to see voters knock them down a few pegs. As Just the News reported: Of the 10, four

UCLA Creates Database To ‘Track Attacks On Critical Race Theory’ Authored by Carol Cassis via The Epoch Times (emphasis ours), Faculty at the University of California–Los Angeles (UCLA) School of Law have created a database to identify and record efforts to block critical race theory (CRT) being taught in schools across the country. A woman holds a sign against critical race theory in Los Alamitos, Calif., on May 11, 2021. (John Fredricks/The Epoch Times) The database, called the CRT Forward Tracking Project, allows users to “track attacks on critical race theory” and filter the information as part of an effort to “support anti-racist education, training and research,” according to the school. The project was created by UCLA’s Critical Race Studies Program, founded in 2000 as the first law school program in the nation dedicated to critical race theory. CRT, according to the school, is “the study of systemic racism in law, policy and society,” and suggests efforts need to be made to fix these alleged injustices. Parents concerned about Critical Race Theory took home these buttons from a school board activist training Jan. 19, 2022 in Sarasota, Florida. (Alexis Spiegelman) Meanwhile, critics say CRT pushes a controversial worldview related to Marxism that analyzes all aspects of life through a racial lens instead of through the concept of class struggle. UCLA Law announced earlier this month it would track anti-CRT activity through the database at all levels of government across the nation. “The project was created to help people understand the breadth of the attacks on the ability to speak truthfully about race and racism through the campaigns against CRT,” said Taifha Natalee Alexander, project director of CRT Forward, in a statement. The database analyzes these efforts to determine where the activity is happening and how opponents are taking action, such as protesting curriculum